Making vegan puff pastry dough from scratch is easier than you think using this fool-proof cheat method. Enjoy some crispy, flaky goodness in half the time!

Traditional puff pastry is made by encasing a slab of butter in a basic dough made with flour, water, butter and salt. Then the block is rolled and folded at least 4 times, chilling for 30 minutes between each fold.

To cut down on the lengthy process, I used a technique that includes folding in shreds of frozen vegan butter between layers of dough. The dough is then rested for an hour then rolled and folded twice with a final 15 minutes resting time.

The method was adapted from Paul Hollywood’s recipe for quick puff pastry. By using frozen instead of just chilled vegan butter, this allows more time to roll and fold the pastry dough without chilling too many times.

The dough may not rise as high as puff pastry made using the traditional method but the result is just as crispy, flaky and satisfying.

Homemade dairy-free puff pastry is also cheaper than storebought and it only requires 4 ingredients! Here are some FAQs and answers to help you along the way:

Can I use solid coconut oil to make puff pastry?

Currently, I live in the Caribbean where it’s warm pretty much all year round. Coconut oil would be difficult to work with as it could melt rather quickly during the rolling and folding steps.

It’s key to keep the butter as cold and solid as possible while making the dough. While baking, the solid pieces of vegan butter will melt releasing steam, causing the pastry to rise or “puff up”. This also leaves tiny pockets throughout the layers of dough, giving it the desired flakiness.

I recommend using a stick form of vegan butter. Earth Balance Vegan Buttery Sticks would work well in this recipe. Don’t go for spreadable vegan butter or margarine. They have a higher amount of water which could result in a less flaky and more gummy or tougher result.

At what temperature should I bake vegan puff pastry?

The temperature used to bake vegan puff pastry dough depends on the individual recipe. Generally, puff pastry needs to be baked at a high temperature (400°F/205°C) for about 10 minutes for best results.

The high temperature allows the butter to melt and release steam quickly to rise the pastry before the dough sets up.

At a lower temperature, puff pastry will fall flat, squeezing out the butter which could result in a tougher, oily mess. Be sure to preheat the oven and try not to open the oven door while the puff pastry is baking.

Wrap puff pastry dough airtight in plastic wrap or place in a zip lock bag and store in the fridge for up to 2 days or in the freezer for up to 2 months.

When ready to use, thaw in the fridge overnight or at room temperature for about 20 to 30 minutes until it is pliable enough to roll out.

If the pastry dough is too cold, it will crack while rolling. If it is too warm, the butter will melt and it may not rise well while baking.

How much vegan puff pastry dough does this recipe make?

This recipe makes a little over 500g/1lb of puff pastry dough. This should be enough for two 9-inch top pie crusts. I used this puff pastry dough to top my Vegan Mushroom Pot Pie. The flaky pastry paired with the rich, creamy filling makes it quite a treat!

I wouldn’t recommend using puff pastry as a base for large, filled pies such as apple pie, as the filling could weigh down the base and not allow it to puff up as much. This defeats the purpose of making puff pastry.

What can I do with leftover vegan puff pastry?

Leftover puff pastry or strips can be baked and eaten as a snack served plain or with a dip. You can even sprinkle them with shredded vegan cheese, garlic butter and herbs or cinnamon sugar.

I HIGHLY recommend watching the recipe video which shows the whole process from start to finish. It’s inside the printable recipe card. Just scroll down! 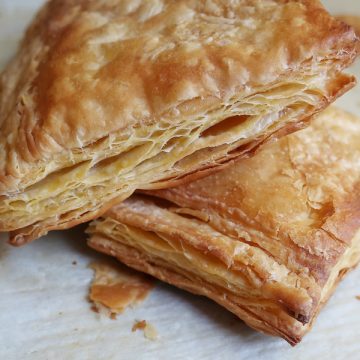 This post contains affiliate links. As an Amazon Associate I earn from qualifying purchases. Amazon Disclosure

This site uses Akismet to reduce spam. Learn how your comment data is processed.

Hey, I’m Jhanelle! Welcome to my space. I love travelling, vegan food and travelling for vegan food. Join me as I share some of my favourite vegan comfort food recipes and travel adventures. Read More…

Get mouthwatering home-cooked meals delivered to your inbox. Sign up now….it’s FREE!
By providing your email, you agree to receive newsletters from From the Comfort of My Bowl. Your information will NEVER be shared or sold to a 3rd party and you can unsubscribe any time.